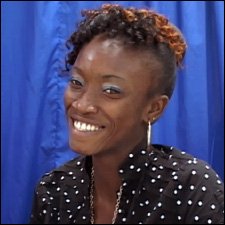 Ms. French, who is also a Clarence Fitzroy Bryant (CFB) College student, was describing the “Crime Don’t Pay ““ Unity Brings Prosperity” session which she attended from February 4 to 6, 2010 in Jamaica.  She said that the symposium enabled youth to express their ideas in an atmosphere of unity, while the organizers and facilitators themselves actively showed care for them.  There was youth representation from St. Kitts and Nevis, Jamaica, Trinidad and Tobago, St.Vincent and the Grenadines, Grenada and Canada.  According to Ms. French a critical theme that emerged was the need to put a stop to crime which was seen as possible if youth worked together toward this end.

The Youth Path member said that two topics of keen interest to her were “Popular Music and Crime” and “We All Have Choices.” Popular Music and Crime was facilitated by Dr. Donna Hope, Lecturer of Reggae Studies at UWI, Mona Campus, Jamaica who according to Ms. French, explained that music can have both positive and negative influences.  As a case in point, the young lady said that at the moment the popular music genre among youth in the Federation is dancehall.  She said artistes include Vybz Kartel and Mavado who often glorify the negative elements of society.

The CFB College student said that the lyrics of such music “play on the youth’s minds” resulting in a particular hype and energy which has to be released in some form or fashion which is most often negative.

“We All Have Choices ““ We Pay for What We Take” was conducted by Dr. Leahcim Semaj, a change consultant who told the youth that they can make the choice to be successful by doing such things as cutting ties from all unproductive persons, obtaining information necessary for success, and choosing to make the necessary sacrifices for success.  The young participants also took part in a panel discussion on the topic “Crime and the Youth,” as well as a workshop session entitled “The Effect of Crime on the Youth.”

Ms. French said that the symposium was held in the Bob Marley Museum and it just so happened that his birthday, February 06 was the last day of the symposium.  She said on that day, those persons who found his life significant came together at the museum, cut a cake and sang Marley’s songs.  The Youth Path member added that several Rastafarians came together and had a ceremony which included drumming and dedications to Robert Marley.

The CFB College student explained that she was chosen to attend the symposium because she is an active member of Youth Path, a UNESCO outreach organization designed to eliminate poverty through tourism.  She said she first became interested in the group when someone came to her school and spoke about its benefits.

She took the opportunity to encourage others to join the organization which she described as an extended family where members learned skills, had fun and socialized.