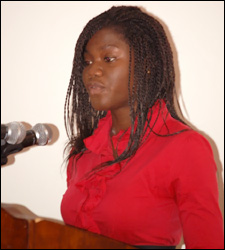 Youth Parliamentarian Ms. Arian Hull has endorsed the Housing and Population Census with a call for the Statistics Department to include a marketing campaign that pulls out all the stops in getting youth and the wider population to participate in the exercise.

“SKNYPA cannot underline enough the need to conduct the census regularly.  But, now that the effort has been made to follow through with the undertaking, the participation of society is essential to ensuring that the exercise provides an accurate and fair reflection of the type of society that we exist in,” Ms. Hull said at the recent launching.

She said the St. Kitts National Youth Parliament Association is pleased to be included in this historic undertaking and sees the launch of the population and housing census as a critical and necessary exercise.

Ms. Hull, a recent university graduate told the youths that Census 2011 “is yet another opportunity to get up and get involved, yet another chance for the talkers to become doers and have a hand in the direction our country takes.”

She said that by completing the questionnaire, data will be provided that will “help your nation, your community, your block, for the next ten years.”

“And not only is it vital to complete the form, but to complete it honestly.  If information drawn from a survey is inaccurate, then the necessary help may not get to where it is most needed,” said Ms, Hull, adding: “For example, information gathered from a survey addresses concerns regarding the housing of the population and its general needs, needs such as education ““ which could mean books for you and resources for your school, employment ““ which could mean improved wages, hours, conditions of labour and the cost of living; as well as health and social services ““ which, for you, could very well include social security, welfare and insurance.”

She pointed out that information from the census will also be used to generate reports that will aid the federation in setting a path and goal in the planning of its future.

“I know that things such as these are of interest to us as youth and if not, they should be,” said Ms. Hull, who declared that SKNYPA encourages the Statistics Department to include a marketing campaign that pulls out all the stops in getting youth and the wider population to participate in the census.

“It is just as important that your department educate the people, and, more so, the youth, about what the census is, what it means and how it affects policy.  The success of this initiative depends on it to a large degree,” she articulated to the gathering which included St. Kitts and Nevis Prime Minister Hon. Dr. Denzil L. Douglas and Minister of Health and Social Development, Hon. Marcella Liburd.

In stating that the St. Kitts National Youth Parliament Association, supports, the population and housing census, Miss Hull implore all young counterparts to do the same.