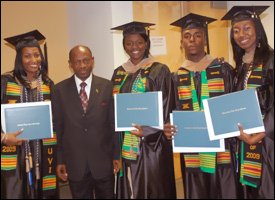 Recent UVI Graduates From St. Kitts With The PM
Photo By Erasmus Williams

Young people have a role to play in the economic, political and social development of St. Kitts and Nevis and make meaningful contributions to the existence of a competent, responsible, law-abiding and positive youth demographic in the twin-island Federation.

Prime Minister Hon. Dr. Denzil L. Douglas said Tuesday this year’s annual National Consultation on the Economy will focus on the youth of the twin-island Federation, their potential and their prospects.

St. Kitts and Nevis Prime Minister Hon. Dr. Denzil L. Douglas said during his weekly radio programme “Ask the Prime Minister” on Tuesday, that if approached with imagination and commitment, the young people can make meaningful contributions to the development of a competent, responsible, law-abiding, and positive youth demographic.

“Some make the mistake of assuming that the youth of a nation are impacted primarily via the policies and programmes of those government ministries and departments that deal specifically with “˜youth.’  In truth and in fact, every aspect of a government’s deliberations ““ from housing to agriculture, and from health to public works, none of which seem, on the surface, to be in any way connected to “youth,” if approached with imagination and commitment, can make meaningful contributions to the development of a competent, responsible, law-abiding, and positive youth demographic,” Prime Minister Douglas told listeners during his weekly call-in radio programme “Ask the Prime Minister.”

He said the consultation on September 9th and 10th  will be held with special emphasis on the ways in which the various programmes and policies, throughout the various government ministries and departments impact on the youth.

Dr. Douglas pointed to last December’s National Consultation on Crime which has resulted in the unveiling of the YES programme – a model for young people who are restless with anti-social behaviour.

He said consultations held over the years are extremely valuable to the government “as we set policies that both reflect the will of the people, as well as serve the short, medium, and long-term interests of this proud and progressive nation.”

“However, as September 9th and 10th speed ever closer to us, I hope that this important objective ““ the interplay between the budget and our youth – be kept in mind so that feasible, effective, and workable initiatives can be proposed, and, hopefully, formulated and implemented in the long-term interests of our youth and, therefore, in the long term interests of the federation at large,” said the Prime Minister.

Recently Prime Minister Douglas vowed to use the resources of the country to empower the young people to raise themselves out of poverty by getting the necessary education and preparing themselves to build St. Kitts and Nevis into a first-class country.

Loans totalling five million dollars have been approved for nearly 80 students by the Development Bank of St. Kitts and Nevis Development to study at colleges and universities overseas for the first six months of this year.

Prime Minister Douglas has disclosed that between July 1995 when the St. Kitts-Nevis Labour Party took office to December 2008, the Development Bank of St. Kitts and Nevis, has financed loans totalling EC$84 million to 1,767 students to study at colleges and universities, compared to 171 students who received loans totalling EC$900,000 during the 15 year tenure of the former People’s Action Movement (PAM) administration of the Prime Minister the Right Hon. Sir Kennedy Simmonds.