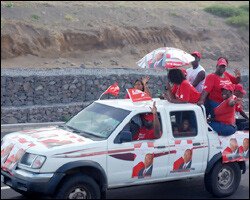 Police and independent persons estimate the several mile long cavalcade of cars with over 8 thousand persons, most of them young people.

The whistle stop started at Port Zante and wended its way along Cayon Street, west towards the new round-a-bout just outside Buckley’s under the by-pass and unto the new West Basseterre By-Pass Road, New Road, St. Peters and return to the airport section of the West By-Pass Road towards Beaumont Park, via Cayon and Tabernacle.

The Labour supporters swarmed into Beaumont Park to watch horse racing before going back into their various transportations for a Gospel Rally at Green Tree Housing Project, where Prime Minister Douglas and other Ministers of Government addressed a mammoth crowd.

The whistle stop grew bigger and bigger as it moved through the villages with well decorated vehicles with their occupants donning several Labour Party election paraphernalia including balloons, horns, bandanas, whistles.

Several hi-fi systems and cars blared popular songs of the candidates and the Labour Party.