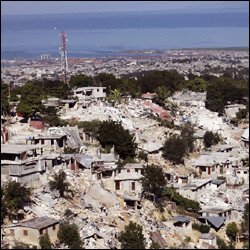 Buildings Destroyed In Haiti By Earthquake

Leader of the People’s Action Movement, Lindsay Grant has expressed condolences and sympathy to the Government and people of Haiti . Grant’s comments came on the heels of the island’s devastating earthquake which has reportedly left thousands dead.

It was reported that a 7.3-magnitude earthquake which struck off the coast of Haiti is feared to have caused major loss of life in and around the capital, Port-au-Prince . The earthquake is being described as a “catastrophe of major proportions”. According to reports, buildings including a hospital are reported to have collapsed, with streets said to be blocked by rubble. The quake, which struck about 15km south-west of the capital, was quickly followed by two strong aftershocks of 5.9 and 5.5 magnitude.

Grant also urged that people around the world especially within the Caribbean to come immediately to the aid of Haiti in whatever way that they can. He noted that the Prime Minister should call off the planned concert slated for Warner Park so as to afford Wcylef Jean an opportunity to visit his country in an effort to see what he can do. Grant said that despite his party being in full election gear he strongly believes that whatever assistance that it can mobilize in helping to assess the damage and the provision of relief while determining further needs, it is prepared to do.

“While we are working very hard to relieve our people from the significantly high crime rate, high cost of living and unbearable corruption that has been plaguing our federation for the past 15 years we understand the pain and agony that the people face in Haiti with this recent disaster and would like to remind the that we stand very committed and dedicated to your cause as like us, we strongly feel that a new day will soon yearn in your country, thus affording you an opportunity to reflect and evaluate,” said Grant.

“Thus we are going to source whatever help and assistance that we as a party can give to you and sincerely trust that you will continue to hold unto hope and faith as it is the only tools that will guarantee your survival. We the people of St Kitts and Nevis have had our own earthquake in the last 15 years of an incompetent, impotent and corrupt administration.  However while we have sought to weather the storm we are confident that come January 25th we will be free”.

He said further that the people of Haiti should remain strong and determined in getting past this hurdle, noting that they are resilient and are confident that they will be able to bounce back. He stressed that his party remains committed and supportive and will seek ways and means in which they can lend a helping hand during this urgent crisis.

The party leader also expressed deepest condolences to and solidarity with the government and people, particularly the families of the victims who perished in the earthquake.

Grant noted that as the poorest country in the western hemisphere, Haiti is likely to need international aid in order to cope with the quake’s impact stressing that the Government of St Kitts and Nevis can lend its fair share of help.