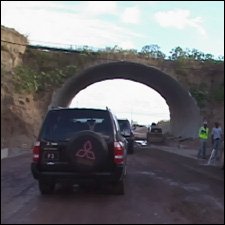 The pace and quality of ongoing work on the West Basseterre Bypass Road was given the green light by a high level government delegation that toured the project, on Thursday.

“I am very, very impressed with the amount of work that has been achieved,” Prime Minister Honourable Dr. Denzil Douglas said, after visiting the stretch of road between New Road and Buckley’s.

The Prime Minister was joined by Minister of Works, Honourable Dr. Earl Asim Martin, Minister of Agriculture, Cedric Liburd, and Chief Secretary, Joseph Edmeade. The party was told of alterations to the original designs which were made to ensure a smooth flow of traffic and to link more communities to the road such as the introduction of an alternate route from Shadwell to New Road. Considerations were also given to the projected business growth at Buckley’s and the new network accommodates the expected demand.

Prime Minister Douglas noted that this project will be of great service to the public since the number of vehicles in the country, which was listed at 10,000 in 1995, has doubled in the last 15 years.

“I’m very satisfied that this is clearly demonstrating today “˜It’s Working,’ he said, borrowing a line from a popular tourism awareness campaign. “”¦ This project was absolutely necessary and it is money well spent.”

The St. Kitts and Nevis leader emphasized that “when one speaks about [the national] debt, [the benefits] are here in the country to be seen and this project is a clear manifestation that money borrowed has been well spent in the further development of the country, in order to improve the quality of life of the people of St. Kitts and Nevis.

Minister Martin expressed appreciation for the hard work and professionalism being shown by the local construction crew and noted that Government’s foresight in developing this road network project will enhance the infrastructure and add to the attractive investment climate in the Federation.

The first section of the West Basseterre Bypass Road, which stretches from Golden Rock to New Road, was opened last December. The complete project is scheduled to conclude by the end of the year. The total project is estimated at US$12.5 million.