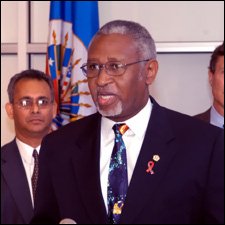 The Joint Commission was established in 1974 to promote closer economic, cultural and technological ties between Mexico and the Caribbean Community countries and to exchange information on issues of common interest in the international forums.

The Foreign Secretary stressed the strategic importance of the Caribbean for Mexico, due to its cultural affinities, shared history and geographical proximity. She also stressed the commonality of positions between both countries in the regional and international forums.

The delegations analyzed the state of the bilateral relationship and gave special attention to issues such as the promotion of trade and investment, air and sea transportation, climate change, the fight against organized crime, health, agriculture, energy and viable cooperation projects.

As a result of the meeting, the Bicentennial Scholarship Programme was created for the countries of the region, as well as a technical-scientific cooperation program. In addition, the heads of both delegations signed the final declaration of the meeting that sets forth all of the commitments that were established.

The efforts of both parties have made the Mexico-CARICOM Joint Commission into the most important forum for giving impetus to a closer relationship between Mexico and CARICOM in all of its aspects.

The Caribbean Community was created with the Treaty of Chaguaramas on July 4, 1973. CARICOM is made up of 15 countries: Antigua and Barbuda, Bahamas, Barbados, Belize, Dominica, Guyana, Grenada, Haiti, Jamaica, Montserrat, St. Kitts and Nevis, Saint Lucia, St. Vincent and the Grenadines, Suriname and Trinidad and Tobago.