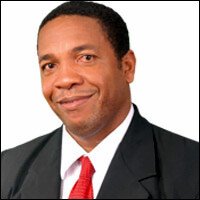 The success of the Verchilds High School at the 2010 TDC/Coca-Cola/Lime Interschool Championships has been commended by the Minister of Sports and Parliamentary Representative for the area Honourable Glenn Phillip.

This feat is made even more impressive since Verchilds High has a student population of 319 while Sandy Point has 590. Additionally, two of the school’s students Lonzo Wilkinson Jr. and Rosalie Pringle were adjudged the top performers of the contest.

Minister Phillip, clearly moved by the continued progression of the academic and athletic programmes, made a personal monetary donation to the school’s sports department. This contribution follows up an earlier presentation of a laptop (organized by the Constituency Representative) to the language department of the school.

“He (Minister Phillip) is always interested in the school,” Principal Addison Warner told SKNIS. He explained that even before entering the field of politics, Minister Phillip has been a supporter, a tradition that he now continues while in Government.

Principal Warner thanked the Minister for his continued commitment. He also expressed appreciation to the hard working staff of the Ministry of Sports as well as the St. Kitts-Nevis Amateur Athletic Association (SKNAAA). He added that the construction of the Silver Jubilee Athletics Stadium has made the Championships more competitive as local athletes look forward to performing in the national stadium.

This weekend, student athletes on the primary school level will take center stage at the Rams Primary School Track and Field Championship.