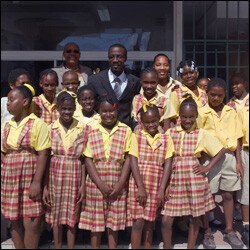 Eighteen students and a teacher from the Irish Town Primary School in Basseterre were welcomed Wednesday to the gallery of the National Assembly Chambers.

Speaker of the lawmaking body, Hon. Curtis Martin, in welcoming the Grade Four students and their teacher, Mrs. Cleo Cogger, noted that he is a former student of the Irish Town Primary School.

He further noted that the students are required to observe the proceedings of the National Assembly as part of their studies on the topic of “Government.”

“Students should also be able to identify the Speaker of the House and its members,” said Coggers.

The session was the first day of the debate following the presentation of the 2010 Budget Address.