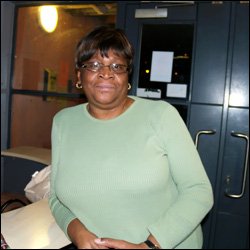 At least five women in the Federation of St. Kitts and Nevis suffering from breast cancer stand to gain from the philanthropy of nationals living in Leeds, England, who last week pledged to raise £10,000 (about EC$40,000) that will be used in the awareness campaign.

At an annual general meeting held on Tuesday evening Feb 17 at the Leeds West Indian Centre in Chapeltown, Leeds, nearly 50 members of the St. Kitts and Nevis Association in Leeds launched a Breast Cancer Awareness Fund whose aim is to raise awareness of Breast Cancer amongst the nationals of St. Kitts and Nevis and to also raise at least £10,000.00 to support women in the Federation.

Spearheading the breast awareness fund is Rev Gloria Griffin-Hanley, who is the Chair Emeritus of the St. Kitts and Nevis Association in Leeds, after retiring from the Chair in 2006. She noted that a small fundraising sub committee comprising of 5/6 members will be formed, three members appointed by the management committee and two or three other members who are Nationals.

During a recent interview at the Leeds West Indian Centre, Rev Hanley, who was born in Cayon and educated at the Basseterre Girls High School but immigrated to the UK in 1968 where she trained as a nurse then a midwife, said that she was touched by the plight of women suffering from breast cancer during a visit to the Federation last year.

“Whilst on a visit to the Federation in October 2008, Breast Cancer awareness month, I was listening to a Radio discussion on a local FM radio station, about breast cancer,” commented Rev Hanley. “During the discussion I learnt about the needless death of women who were not attending for treatment following Mammogram after receiving a positive result.”

She recalled that a survivor of Breast Cancer shared her moving story and highlighted the cost of her treatment. The survivor was fortunate enough to have friends in Trinidad so avoided the added worry of having to look for extra money to pay for accommodation.

“I was stunned at the cost,” said Rev Hanley. “I was also troubled that women were not going forward for treatment. This was mainly due to financial reasons and the fact that the women had to travel to Trinidad for treatment. Some simply could not afford the air travel and the accommodation let alone the astronomic cost they would face for the complete treatment.”

From the programme she learnt that a fund had recently started but money was flowing in at a slow pace. She said that she reflected on the easy accessibility and free treatment offered by the National Health Service, to women in the UK. Even when women made the decision to have treatment privately the cost was far less than that paid by the women in the Federation.

“I made a pledge that on return to the UK I would try and raise funds to help at least 5 women in 2009/10. I am fortunate to be blessed with good health and so far none of my relatives have been afflicted with this incurable disease but the future is unknown. I am determined that any help that can be given from Nationals in the UK will be sought,” she commented.

From figures she obtained last year, she found out that women can be screened (Mammogram) at a cost of US$150.00 at the JNF Hospital. If they require Mastectomy, removal of breast, this would cost the woman US$1500.00.

She further observed that the surgical procedure would be carried out in the Federation and chemotherapy would cost US$10,000.00. Any further treatment the women would have to travel to Trinidad which could last for 24weeks would cost US$50,000.00.