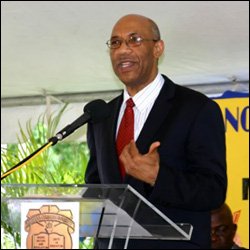 St. Kitts and Nevis’ Governor-General, His Excellency Dr. Sir Cuthbert Sebastian is among three Heads of State and some 2000 guests who will witness Thursday’s swearing in of the new Governor-General of Jamaica.

Accrding to the Jamaica Observer, the former president of the West Indies Union Conference of Seventh-day Adventists, Dr. Patrick Allen, will take over the reins as the sixth Governor-General of independent Jamaica shortly before sundown Thursday afternoonAllen, who also demitted office as chairman of the Manchester-based Northern Caribbean University (NCU), succeeds Sir Kenneth Hall who in January indicated his desire to demit office, citing health reasons.

Allen’s appointment sparked vigorous debate because of his high office as an Adventist leader, but he moved to reassure Jamaicans that he would not seek to impose his beliefs on the nation, saying “I will be everybody’s governor-general.”

At the ceremony marked by the traditional pomp and pageantry, Dr. Allen, 58, will take the oaths/solemn declarations and affirmations of allegiance and office before being presented with the Royal Commission by the retiring head of state at King’s House in Kingston, the official residence of governors-general.

Some 2,000 guests, including dignitaries, have been invited to attend.

Following the lowering of the outgoing governor-general’s standard and the raising of the new,  Dr Allen will be invested with the Insignia of the Order of the Nation, the nation’s second highest honour reserved for governors-general and prime ministers, by Chief Justice Zaila McCalla.

Sir Kenneth, 67, who received the Order of Jamaica (OJ) in 2004, has accepted an offer from the University of the West Indies (UWI), Mona to serve as an honorary distinguished research fellow. He had taken up the office as head of state in February 2006, fresh from the world of academia, where he had served as pro-vice chancellor and principal of the Mona campus of the UWI from 1996.

Besides, Sir Cuthbert, the President of Dominica, His Excellency Dr. Nicholas Liverpool, and Mrs. Liverpool and the President of Trinidad and Tobago, His Excellency, Professor George Maxwell Richards, and Mrs. Jean Ramjohn-Richards will join a list of other dignitaries, officials, and guests, headed by Prime Minister the Most Honourable, Bruce Golding, who will attend the ceremony.

The governor-general represents the Jamaican monarch and head of state who holds the title of King or Queen of Jamaica (now Queen Elizabeth II), on ceremonial occasions such as the opening of Parliament, the presentation of honours and military parades.

Under the Jamaican Constitution, he is given authority to act in some matters, for example, in appointing and disciplining officers of the civil service, and proroguing Parliament. His assent is necessary for laws to come into effect. Only in a few cases is he empowered to act entirely on his own discretion.
.