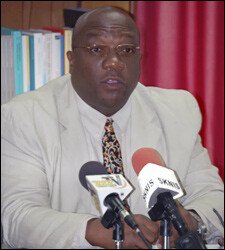 The pomp and glamour of this past Sunday’s swearing in ceremony was highlighted by the announcement of the Hon. Patrice Nisbett as the Minister of Justice and Attorney General but may have been over-shadowed by what many saw as the “clipping of the wings” of Dr. Timothy Harris.

Dr. Harris who is now designated as a Senior Minister was given the responsibility of overseeing the Ministries of International Trade, Industry, Commerce, Agriculture, Consumer Affairs and Constituency Empowerment. However the Ministry of Finance was most notably missing from the list of portfolios assigned. This fell in line with the predictions of many political observers as well as former Labour MP Dwyer Astaphan who all indicated that Prime Minister Douglas may want to “clip the wings” of Dr. Harris and strip him of the all important Finance portfolio.

Dr. Harris’ success as Minister of Finance has been well publicized. In November the Ministry under Dr. Harris’ leadership was lauded for  being able to make agreements translating to nearly EC $4 million worth of taxes, penalties and interests being paid during the Tax Amnesty programme, which was an initiative of Dr. Harris and his finance Ministry that was launched  in April of last year.

“Dr. Harris’ success in the Ministry of Finance, which  is  now been seemingly rewarded with him being stripped of the Ministry, certainly adds much credence to the view  that Dr. Harris’ wings have been clipped by PM Douglas,” said PAM MP Eugene Hamilton

Dr. Harris’ efficient brief 12 month long handling of the Ministry of Finance was in stark contrast to his predecessor and now successor Dr. Denzil Douglas who oversaw the 12 year rapid rise of the St.Kitts-Nevis national debt to almost $3billion.

In the last 12 months fiscal performance of the gov’t has been described by Dr. Harris as historic as out-turns had been consistently in surplus.  It would seem therefore that Dr. Harris’ assessment and that of most does not find agreement with Prime Minister Douglas.

“I would have to agree with Dwyer Astaphan that the stripping of the Ministry of Finance from Dr. Harris is in my view an attempt by PM Douglas to clip his wings,” said Const #8 representative the Hon. Eugene Hamilton. “Why else would you remove someone who has brought a level of success to a Ministry in terms of improving fiscal out-turns. It therefore does raise a significant concern as to the Prime Minister’s motive which may very well go way beyond just trying to “clip the wings” of Dr. Harris,” Hamilton continued.

Dr. Timothy Harris has been speculated to be the heir-apparent to Dr. Denzil Douglas as leader of the Labour Party. However inside sources have suggested that the Prime Minister may be resistant to Dr. Harris being his successor.