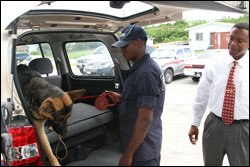 A New Ride For The Nevis K9 Unit

The Nevis Island Administration (NIA) handed over on Wednesday August 1, 2007, an air conditioned Suzuki APV 2007 model  to the Nevis Division of the Royal St. Christopher and Nevis Police Force for use by its K9 Unit.

The vehicle was handed over at the TDC Automotive Division at Pinneys by the Hon. Dwight Cozier Junior Minister with responsibility for security in the Premier’s Ministry, less than one month after Premier Parry announced at a Crime Symposium that a special vehicle would be provided for the Unit.

During the handing over ceremony, Mr. Cozier thanked the TDC Group of Companies for their assistance as they had made the vehicle available to the NIA at a concessionary rate.The Junior Minister said one of the most critical aspects of crime fighting in Nevis was the K9 Unit and the NIA has responded to the emergence of illegal firearms and drug proliferation on the island through the enhancement of the Unit.

He disclosed that the K9Unit had so far one dog in its arsenal but the NIA had taken the initiative to construct a three dog kennel at the Newcastle Police Station, in the hope that there would be continued assistance from corporate citizens and other concerned citizens to acquire additional dogs for the Unit.

“I am saying this quite bluntly to the public and our corporate citizens to recognise the fact that there is an effort in Nevis now to take crime seriously, to fight crime and to follow the example that TDC and other corporate citizens and ordinary residents of Nevis has set in contributing to the dog kennel,” he said.

Mr. Cozier said, the NIA had given its commitment to the security of Nevis and it is in that vein that they had vowed to work directly with the police and also with the island’s corporate citizens.

Meantime, Head of the Nevis Police Division Superintendent Joseph Liburd thanked Hon. Joseph Parry and the NIA, TDC and other civic minded persons, for their assistance to the Police in their effort to tighten security and safety on the island.

“We have always been grateful to TDC because they have always been very helpful to the police. It was in 2005 when we were in dire need of vehicles and TDC was a part of the group that came to our rescue. TDC did not only assist with this group but on its own, delivered a Rav 4 Toyota vehicle to the police, which is presently in use. All of these gifts have helped in keeping Nevis’ crime rates very, very low,” he said.

Mr. Liburd also singled out the assistance of a community group in Gingerland which had answered the call for a K9 Unit. He said Mr. Lincoln Hoffman and Mr. Martin Delguish spearheaded the effort and had raised sufficient funds to purchase the dog Casio and to send two police officers on training in Miami.

“I must report that the officers were so well trained and took in the training so well that they were asked to remain a little longer than we expected so that they can assist in training others and other dogs. So we now have not only a very well trained dog but we have two specially trained officers who can take any dog from anywhere and train them to do what they want them to do…

Mr. Ernie France Managing Director of the TDC Nevis Division noted his company’s assistance to the police and the people of Nevis. He said they had recognised that as a good corporate citizen, it was important they played their part to ensure there was a stable, safe economic and business environment which attracted investment.

“We are willing to play our part to ensure that this stable environment is maintained,” he said.