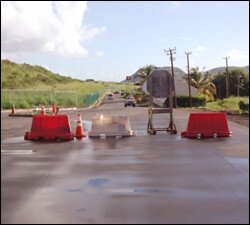 Head of the Traffic Department of the Royal St. Christopher and Nevis Police Force, Inspector Cromwell Henry is requesting the cooperation of motorists in anticipation of the opening of a section of the West by-Pass Road.

Inspector Henry said that there will be changes in the flow of vehicles when that portion of the West Basseterre By-Pass Road between the western end of the airport runway and Shadwell is opened.

“Vehicles travelling from Basseterre to St. Peters, having passed Jam’s Welding will not be permitted to turn right on to the portion of road immediately west of the runway. Instead they will be required to continue westwards over the bridge to the round-about  at Shadwell and return eastwards along the same portion of road, then turn left to St. Peters,” said Henry.

He said that vehicles travelling from St. Peters wishing to turn westwards to Shadwell, will not be permitted to turn right on to the By-Pass Road, but will be required to continue eastwards past Gillard’s Service Station around the round-a-bout at Taylor’s, returning in the opposite direction along the by-pass road towards Shadwell,” said the senior police officer.

Inspector Henry said though it may appear inconvenient to travel the extra distances, the measures were designed to reduce the risk of accidents which may be caused by vehicles turning across traffic on a road of that nature.

He said that the requisite signage will be installed before a date for the opening of the road is announced.