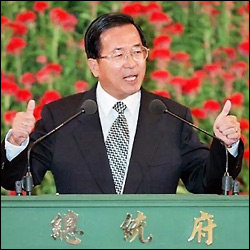 The top leadership of the Republic of China on Taiwan has congratulated Prime Minister Hon. Dr. Denzil L. Douglas on his re-election victory at Monday’s poll.

In his congratulatory message to Prime Minister Douglas, Taiwan’s President, His Excellency Ma Ying-jeou, said the Labour Party’s fourth consecutive election victory, serves as a resounding confirmation of his outstanding leadership over the past fifteen years.

“I also wish to take this opportunity to reaffirm my belief that, through our joint efforts and cooperation, bilateral relations between our two countries will go from strength to strength in the years ahead,” said President Ma.

Taiwan’s Premier His Excellency Wu Den-yih said Prime Minister Douglas’ dedication and leadership over the past fifteen years have once again been recognized by the people of St. Kitts and Nevis.

“I am confident that, under your continued leadership, the close and cordial relations between our two countries and peoples will be further strengthened in the future,” said Wu.