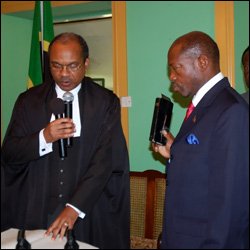 “I Dr. Denzil Llewellyn Douglas, do swear, that I will honour, uphold and preserve, the Constitution of St. Christopher and Nevis and the Law, that I will conscientiously, impartially and to the best of my ability, discharge my duties as Prime Minister, and do right to all manner of evil, without fear or favour, affection or ill will. So help me God,” said Fourth Term Prime Minister of St. Kitts and Nevis, Hon. Dr. Denzil L. Douglas as he took the Oath of Allegiance.

After signing, the Governor General, His Excellency Dr. Sir Cuthbert Sebastian, read the Instrument of Appointment before presenting it to Prime Minister Douglas.

“I do hereby appoint you, the said Honourable Denzil Llewellyn Douglas to be the Prime Minister of St.  Christopher and Nevis with the powers, rights, privileges and advantages to the same, belonging with effect from Wednesday 27th January 2010,” said the appointment given under his hand.

Witnessing the ceremony, which was carried live on radio and television were other members of the Labour Party Team, the Attorney General, Dr. the Hon. Dennis Merchant; the Ambassadors of the Republic of China on Taiwan, Venezuela and Cuba; representatives of local and regional institutions, senior government officials, Labour Party executives and supporters and family members of Prime Minister Douglas.