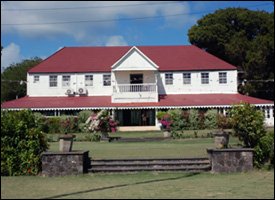 For the fourth time in his decorated political career, charismatic Kittitian physician and cousin of First National Hero, the Right Excellent Sir Robert Llewellyn Bradshaw, St. Paul’s-born Dr. Denzil Llewellyn Douglas, was sworn in as the Prime Minister of St. Kitts and Nevis on Wednesday.

In a brief statement, he thanked all those who made this historic moment possible and said it was the start of a new journey together, one that is for all of the people of St. Kitts and Nevis.

“I said yesterday that it had been hard. It had been very trying and tested and it has been bruising and so I ask that the healing process begins today. We must recognise each of us as our brothers’ keeper. Let us make sure that we can use this victory in consolidating our efforts to realise the programmes and policies of the Labour Party in Government that they would embrace every single person,” said Prime Minister Douglas.

Dr. Douglas, 57, whose St Kitts-Nevis Labour Party (SKNLP) won six of the 11 seats in the National Assembly at Monday’s poll challenged civil servants to ensure that they continue to work hard, and to “serve the interests of our citizens.”

He noted there have been several complaints of complacency and the ongoing public service reform exercise will have to be pursued more vigorously under new leadership.

“I want to insist that we discharge our duties fearlessly. Let us make sure that we serve every person in this country,” said Prime Minister Douglas.

Dr. Doulas also called on the people of the federation, regardless of political affiliation, to accept the outcome of the election and work in the national interest.

“I ask that God give me the wisdom, give me the strength and health to pursue the task that lies ahead. I say to the people of this country: I cannot do it alone, my team cannot do it alone, it takes the support of all of us. It takes the prayers of all from our Nation so that we will survive, not only survive but we would be able to continue to lead a life, where each man and woman can be proud, proud from the quality of life that we shall enjoy so that we can be proud citizens of St. Kitts and Nevis,” said Prime Minister Douglas.