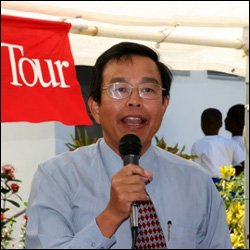 Students on Nevis who wish to pursue agriculture after secondary school will have the opportunity to tap into scholarships from the government of Taiwan to move into that specialty. The opportunity, a top Taiwanese official in St. Kitts and Nevis said, was one of several to further deepen the relationship between Taiwan and the Federation.

The disclosure was made recently by Resident Ambassador of the Republic of China (Taiwan) to St. Kitts and Nevis His Excellency Mr. Rong-Chuan Wu, at the annual Open Day of the Taiwan Technical Mission’s demonstration farm at Cades Bay in Nevis.

“This year 2009, we have a new phase of manpower development for cooperation programme with this Federation. We specially allocate a certain amount of resources to support those high school students who are willing to go to agriculture after their graduation.

“We want to give those potential students in the agriculture vocational programme”¦scholaarships and to help them to immediately go into agriculture after their graduation because we believe that this is the time for our younger students to come back to learn ,” he said.

Notwithstanding, the Ambassador further explained that there were other areas that Nevis could benefit directly from through collaborative efforts of the Ministry and Department of Agriculture and the Taiwan Mission.

“We would like to develop the Island of Nevis as an island of pineapples and guava because these two potential fruits are commonly identified by both our Missions and the Ministry of Agriculture,” he said and pointed to several available pineapple seedlings which he said were ready for distribution to interested farmers.

The Ambassador also invited Nevis farmers who wanted to devote themselves to pineapple cultivation to consult with the Mission Head and the Ministry of Agriculture.

Mr. Wu also spoke of the scattered farming that had been done by farmers throughout the federation and cited that the Missions on both islands had began to promote alternative intensive farming which had greater benefits.

“It will save you the land area; you don’t have to prepare lots of land. Secondly it is easier for you to manage it. The management skills are easier because you apply fertiliser, water in that limited area bed instead of a huge area and lastly it is even more beneficial.

“When you compare Ã¢â‚¬” take cantaloupe growing as an example, the difference is about 20 times. It means that one acre of cantaloupe can produce more than 30 acres of scattered farming. So that is what we are going to promote,” he said.

The Ambassador also used the opportunity to address other policies which he said were in place to assist local farmers which included the Foundation of National Development which was managed by Executive Director Mr. James Webb.

“He has managed this Foundation so successfully; we have just finished the first phase of small enterprises of a loan agreement from 2001 to 2007. We are going to start the next phase and we are going to concentrate on small farmers.

“In other words our potential farmers will be able to ask for loans from this foundation. So all these kinds of policies are just for one purpose – to further develop the agriculture on this island,” he said.

Mr Wu said the Federation was too beautiful with fertile soil and an abundance of rainfall to have to import agricultural produce. He was of the view that through joint efforts of the government and the Missions, self sufficiency in agricultural produce would be achieved in the near future.