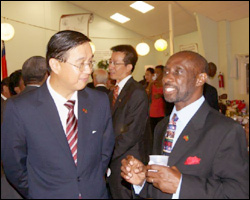 The Republic of China on Taiwan has expressed appreciation to St. Kitts and Nevis and its other 16 allies for backing its bid to participate as an observer in the International Civil Aviation Organisation (ICAO).

“We would like to extend our gratitude to the allies for their explicit support during the recent ICAO General Assembly in Montreal, Canada,” the Republic of China Ministry of Foreign Affairs said.

“Participating in the ICAO and bolstering international aviation safety remains a top priority for the ROC government,” said a statement.

According to the Ministry of Foreign Affairs, the allies expressed their support verbally or in writing, with Gambia and St. Vincent and the Grenadines employing both methods.

During the meeting, the allies argued that as Taiwan is one of the biggest air hubs in East Asia, its exclusion from the ICAO threatens the well-being of Taiwanese people and violates the organization’s mission of maintaining global aviation safety.

“We urge the international community to recognize Taiwan’s bid for meaningful participation in the ICAO and include the nation in the world aviation system,” the allies said.