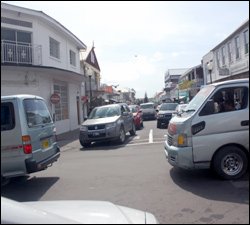 While economic development in any country often comes with an increase in vehicular traffic, drivers have an obligation to respect the laws of the road.

St. Kitts and Nevis Prime Minister Hon. Dr. Denzil L. Douglas said although the twin-island Federation has seen such an increase there is need for a corresponding increase of responsibility and caution.

“All drivers have an obligation to respect the traffic laws in general and our speed limits in particular.  But bus drivers and the operators of large trucks have a special obligation, and a special duty, to be particularly vigilant. We simply cannot have huge cement trucks, huge trucks transporting fuel, huge container trucks and other large industrial vehicles moving along the Federation’s roads in the exactly the same way they would if they were, say, a tiny compact vehicle,” said Prime Minister Douglas during his weekly radio programme “Ask the Prime Minister” on Tuesday.

Referring to the major mishap on the South East Peninsula when a SOL oil tanker overturned, Prime Minister Douglas said that type of event should not happen on our roads.

“Fortunately for the general public, many of the large vehicles in our Federation have the names of the business displayed somewhere on the vehicle. This is very helpful because whenever we witness reckless driving by any of these drivers, we can take a few minutes and call the company involved, with the details regarding the date and place on which act of reckless endangerment occurred, since this would enable the company to figure exactly who was driving their truck at that time.  Companies need to have this information, and would welcome this information, because reckless drivers could expose them, the companies, to serious liability.  And by calling, we help to keep our roads safe,” he said.

“The police, of course, have their job to do, and they will do their job. As you know, radar detection technology is now a part of our traffic enforcement arsenal.  However, the general public has its role as well.  When we witness public endangerment by a reckless driver, we must take the time to alert the company that owns the truck.  When we witness reckless endangerment by a private driver, we should place a call to the traffic department, and give them the license number involved.  They will then know what to do, they will know whether other persons have called about that driver before, and we will have done our part as concerned citizens,” said Prime Minister Douglas.