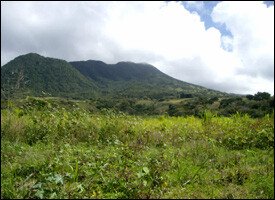 Agricultural Lands In St. Kitts To Be Allocated Photo By Erasmus Williams Basseterre, St. Kitts – Nevis February 10, 2009 (CUOPM) A new system will be put in place to expedite lands for agriculture development. Prime Minister and Minister of …

Minister responsible for Agriculture Honourable Cedric Liburd has revealed that government continues to meet the increased demand for land on the part of former sugar workers.

During an interview with the St. Kitts and Nevis Information Service he said that thus far over 100 former SSMC employees have received land for crop and animal production.  Minister Liburd said this was done with the support of the Food and Agriculture Organisation which provided just over $1 million.  He said due to the success of the project including the earnings of the farmers, other former sugar workers have requested land.  He said that some of the applications were reviewed at the Cabinet meeting last Monday.