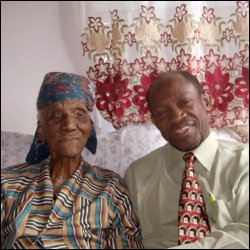 The community of St. Paul’s is mourning the death of its oldest member.

Iris Elliott, better known as “Netty” who celebrated her 103rd birthday in February this year died of natural causes at her home on Tuesday.

“I am deeply saddened at her passing. As the village matriarch she was always jovial, kind hearted, loving, helpful and caring not only to her children, grandchildren and great-grand children and other relatives, but also all the children and members of the community of St. Paul’s and neighbouring villages. I express my sincere condolences to all her family members on her passing,” said Dr. Douglas on Wednesday. When Ms. Elliott celebrated her 103rd birthday, Parliamentary Representative, Prime Minister Hon. Dr. Denzil L. Douglas visited her at her home and both reminissed on “˜the good old days.’

Funeral arrangements were incomplete as of Today.

Born on February 16th 1906, the former Iris Foreman has six children ““ five daughters and a son, who is deceased.

She lived in her own home on the same spot where she was born and was cared for by a daughter Laura Brown, who lives next door. Her other children live in Miami and England.

In 2004, at 98 years, Ms. Elliott had the honour to cut the ribbon at the official opening of the new St. Paul’s Community Centre.

Miss Elliott is the second cenetarian from St. Paul’s to pass away in the last several months. Last Ocrober, Ms. Mary Bradshaw died three weeks after celebrating her 107th birthday.