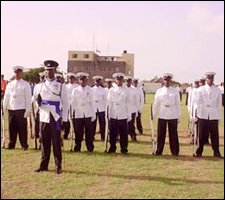 Lectures aimed at increasing the efficiency of police officers to keep the nation’s residents safer were held in Tabernacle, St. Paul’s and Basseterre Police Stations on Wednesday.

Sub-Divisional Officer for St. Paul’s, Dieppe Bay and Tabernacle, Inspector Lyndon David discussed with officers at the St. Paul’s Police Station, the duty of the Station Orderly, investigations, fatigue of the premises and handing over. Inspector David is also the Sub Station Officer at the Tabernacle Police Station.

At the Tabernacle Police Station, Sgt. Charles Smithen discussed the performance of officers on duty, maintenance and care of government vehicles, expectation of drivers and investigators and good working relations between police officers.

Station Officer at the Basseterre Police Station, Inspector Zanhestel Hector lectured to Senior Police Officers who are in charge of the Basseterre Beat and Patrol on their responsibility.

Incident reports, sick report statistics, events and activities for Basseterre including the annual social and the Officer of the Year Award were discussed.