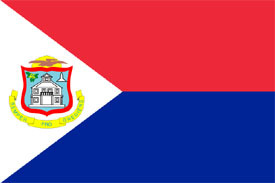 The National Flag of St. Maarten

According to news reports from Dutch St. Maarten, the requirement went into immediate effect on Monday, April 11.

Dutch St. Maarten’s Minister of Justice, the Hon. Roland Duncan disclosed that visas were needed after a fax was sent from the Dutch Consulate in St. Kitts and Nevis to travel agents in countries under its scope, but nothing had been issued by the St. Maarten Government.

Mr. Duncan said the Government had taken the decision to put a visa requirement in place for nationals of Jamaica and Guyana in a bid to curb the influx of undocumented persons and crime.

That decision of the Council of Ministers was sent on to the Dutch Ministry of Foreign Affairs.

Jamaicans and Guyanese have to request visas for St. Maarten in their country of residence and a written request must be submitted by the inviter in St. Maarten for approval at the Immigration and Naturalisation Department, according to Duncan’s press release.

“However, a visa for Aruba is not required for holders of Jamaican passports in possession of a valid multiple entry visa for the United States of America, Canada, or Schengen territories.”

Requirements to apply for a visa are a recent colour passport photo, passport (must be valid for three months after the end of travel), job letter, company registration papers or school letter, bank letter, copy of travel itinerary from a travel agency, copy of current passport along with a copy of the work permit page and travel insurance (US $15,00).

If the trip is by invitation letter, the applicant needs a copy of the inviter’s passport, copy of proof of living in St. Maarten (if not national), and a guarantee declaration.

If the applicant is staying in a hotel, a copy of the confirmed booking and proof of sufficient funds (US $100 to US $200 per day) is required with the application.

Mr. Duncan said he knows of no custom of granting a transition period for the enforcement of a visa requirement.

“I offer no apologies for it. It is not the concern of the Government of St. Maarten if a foreigner who has no right to be here other than through our graces [has booked a ticket before the requirement came into effect].”

Speaking on The Lloyd Richardson Show, the minister said that St. Maarten did not have to inform the countries affected by the visa requirement. The only notification that had to be made was to kingdom partners, and the Dutch Ministry of Foreign Affairs only role is to inform the embassy about the requirement being in place, he added.

“I have no responsibility to inform the governments of Guyana and Jamaica or any other country where visas are concerned. […] The Caricom countries of which all of them are members and which so-called subscribe to free movement, they have been restricting these same nationals also.”

Duncan said that when Prime Minister Sarah Wescot-Williams announced that the two countries would require visas some two months ago, while on the same talk show, “should have been enough warning to anybody.”

He said it is not the responsibility of government someone booked a ticket weeks ago prior to the implementation of the visa requirement.

“One is not guaranteed entry into a country even without a visa or with a visa; even with a visa I can be denied. The mere fact that a person has bought a ticket does not give them any right or any claim.”