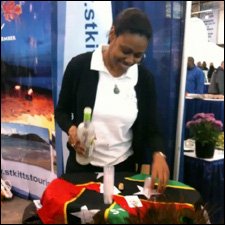 While most of the New York metropolitan area was blanketed in snow, there was only sunshine and warm Kittitian hospitality at the St. Kitts booth!  The island participated in the New York Times Travel Show at the Javits Center again this year from February 26-28, 2010, enticing attendees to get out of the cold and feel the warmth of St. Kitts.

According to South Florida News, over the course of the three-day event, thousands of Show attendees including potential travelers, travel professionals, and media stopped by the St. Kitts booth to learn more about the destination and sample various flavors of the island’s own Brinley Gold Rum.

As a special treat, two of St. Kitts’ authentic masquerades, Lenbo and Tumba Freeman, performed traditional folkloric dances in their colorful costumes and tall, feathered headdresses right in front of the booth, drawing a large crowd as people walking by stopped to watch. Many interested folks took home brochures and other materials, so their inquiries can continue even after the Show’s end.

“Participation in the New York Times Travel Show is a wonderful way for us to have direct contact with potential visitors in this key metropolitan area,” said Mrs. Rosecita Jeffers, CEO of the St. Kitts Tourism Authority.

“Anyone attending the show is already interested in travel, so encouraging them to choose St. Kitts gives us the opportunity to support the non-stop flight from JFK on American Airlines and also impact our arrival numbers for 2010.”