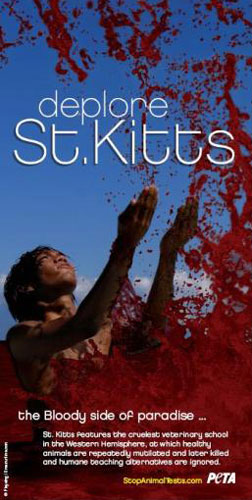 St. Kitts — Anyone planning to visit St. Kitts this season will probably choose to visit another island–any other island–after seeing PETA’s newest advertising campaign, which the group is placing in the St. Kitts airport. The “travel posters” show a man splashing in a blood-red sea and carry the tagline “Deplore St. Kitts”–a play on the island’s tourism board’s own promotional campaign, which urges tourists to “Explore St. Kitts.” PETA’s poster exposes St. Kitts as the home of the Western Hemisphere’s cruelest veterinary school, the Ross University School of Veterinary Medicine.

PETA is asking travelers to steer clear of St. Kitts until the veterinary school stops requiring students to practice surgeries on and kill healthy donkeys, sheep, and goats. Anguished Ross students–including some from the U.S.–contacted PETA about cruel procedures in which donkeys’ nerves and ligaments were severed and to report that sheep were suffering from infected surgical wounds.

In response to PETA’s campaign to persuade Ross to switch to more humane teaching methods, Ross announced earlier this year that it would end invasive and terminal surgeries on healthy dogs. PETA recently purchased stock in Ross’ parent company, DeVry Inc., in order to use its position as a shareholder to persuade Ross to stop killing other species as well.

“We hope compassionate tourists will take one look at our ‘travel posters’ and book a flight home immediately,” says PETA Laboratory Investigations Director Kathy Guillermo. “We will continue to push for a boycott of St. Kitts until Ross stops cutting up and killing healthy animals.”