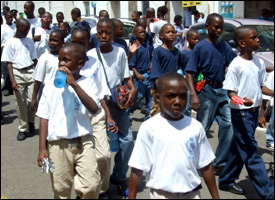 Over a thousand young people paraded through the streets of Basseterre on Wednesday as celebrations for the silver jubilee Independence anniversary of St. Kitts and Nevis continue.

The march climaxed the Youth Rally which saw expressions of national pride in song, dance, poetry and drama. Director of Youth Geoffrey Hanley said that there were over 500 young people from various youth groups, schools and related organizations participating in the event.

The band display by the St. Kitts and Nevis Defence Force Band and the Seventh Day Adventist Pathfinders drum corps, which incorporated scenes from the movie “Drumline” in their performance, set the mood for the other acts that followed at the rally held at Warner Park. An All Star musical by local hip-hop artiste Z-dan, calypsonian Kibianne, gospel rocker Pepper Ranks, folk singer Grace Richardson and others energized the crowd. Other notable performances included a drama presentation by Radaun Thomas, an inspirational song by Karina Phillip, as well as a spirited rendition of “I Can Make It” by a 40-male strong choir from the St. Peters Eagle Boys Club.

Additionally, the launch of the Children’s Carnival Troupe “Viva St. Kitts” took place. Five costumes were on display depicting themes from the rich history of St. Kitts and Nevis including the settlement period up to the faces of nation builders.

After the rally at the Warner Park stadium, some performers and spectators took part in the parade. Ministers of Government along with workers of Government Headquarters and other private and public sector agencies along the route came out of their offices to support the young people as the procession wound its way through town.

SKNIS spoke to Deputy Prime Minister Honourable Sam Condor during the parade and he said that this day, and the 25 years of nationhood, is all about the young people.

“Independence is a continuing process “¦ and so we want them to know that we are here now, and pretty soon we will be passing the baton to them, and so we have to let them understand the importance of Independence.”

Minister Condor has responsibility for Education and Youth Affairs in the Government and stressed that he was “proud” to see so many young people participate in this grand event.

“The rally was really impressive, edifying and inspirational, and it is nice to see the young people getting involved in positive wholesome activities and this [type of participation] is what we want to encourage them in,” the Deputy Prime Minister concluded.