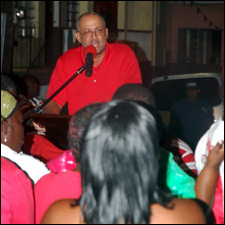 The leadership of the governing St. Kitts-Nevis Labour Party has called on nationals to join the traditional Labour Day March in solidarity with the workers and members of the St. Kitts-Nevis Trades and Labour Union.

“Farmers must march on Monday, Labour Day. We are on the path of creating a fertile land and a progressive land and a land in where there is no scarceness of breads, fruits or vegetables. We have to look towards the future because we have prepared ourselves now. We have built successfully for growth and progress and development in anticipation that a time like this will come and in the end prosperity will be judged on the contribution which each of us has made to the ongoing development of the country,” said Dr. Harris, who chaired a political meeting in St. Paul’s.

Minister of Tourism and International Trade, Sen. the Hon. Ricky Skerritt warned that the “Hate Douglas campaign” continues with the same few people in an effort to “rip the Labour Party apart.”

“This Labour Day, I will march through the streets of Basseterre with my head held high, proud of what we have achieved, proud of what we are doing and proud of what we will continue to be doing to move this country to higher heights and a better quality of life for all,” said Minister Skerritt, pointing out that since the recent elections there has been some difficult international financial and economic times resulting in loss of revenue and higher costs.

“The government has had to take some difficult decisions ““ some unpopular but that is what good leadership is. That is why Dr. Douglas is the best leader because when it is necessary he is not afraid to take difficult decisions. Tough times require tough people making tough decisions but as you know a Labour Government is always a compassionate government and when there are opportunities to take good, positive and remedial action, he will do so,” Minister Skerritt told the large crowd.

Stating that crime is a concern to all, Minister Skerritt called on all citizens and nationals to join the fight against crime.

“We can only win this battle if all hands are on deck. Crime threatens the economy. It threatens jobs, it threatens your peace and stability in your homes and too often it threatens life,” said Minister Skerritt, who expressed confidence that the Government is taking steps and results have already been seen.

He said St. Kitts was still the best place to be in the Eastern Caribbean and still the place where people preferred to be and the Labour Party is still the best party to lead this country and there is no other alternative.

Minister of Public Utilities and  East Basseterre Representative, Hon. Dr. Earl Asim Martin lashed out at former cabinet colleague Dwyer Astaphan whom  when a minister of government wrote articles urging persons to march and also marched, but now that he has left the Government is leading a campaign urging persons not to march.

“We have reasons to March and march with one leader, the Hon. Dr. Denzil L. Douglas, the Prime Minister of this country of St. Kitts and Nevis,” said Dr. Martin.

“They want to deprive the people of the opportunities and gains they have made over the years and all of a sudden, he has no reasons to march and he has been marching all the time and now suddenly he and others have no reason to march. As ordinary people and as workers we all have a reason to march,” said Dr. Martin.

Prime Minister Douglas urged the large gathering to report crime to the police and to provide information to the police in an effort to curtail crime and bring the perpetrators to justice.

Dr. Douglas urged participants to march on Labour Day in support of the measures to combat crime and send a strong signal to the criminal that their actions will not be tolerated.