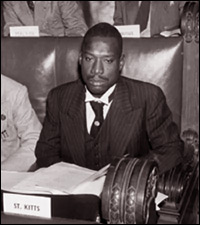 Union and Party officers along with relatives will visit the graves of National Heroes, Their Right Excellencies, Sir Robert L. Bradshaw, Sir C.A. Paul Southwell and Sir Joseph N. France where wreaths will be laid.

Wreaths will also be laid on the graves of the late Sir Lee Llewellyn Moore, the late Clarence Fitzroy Bryant, the late E. St. John Payne and the late Fidel O’Flaherty after brief remarks.

Following the wreath laying, leaders of the Labour Movement will join workers in the traditional Labour Day March from the Patsy Allers Playing Field through Basseterre via Cunningham, Central, Fort, Bank, George and Cayon Streets before returning to the Patsy Allers Field for an afternoon of picnicking and games.