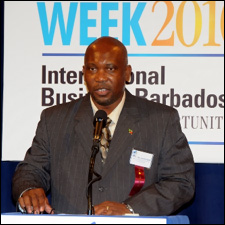 Nevis Junior Minister responsible for Energy, Hon. Carlisle Powell, represented the Federation of St. Kitts and Nevis at a sustainable energy conference in Barbados at which new actions were announced to reduce dependence on fossil fuels and end poverty.

Mr. Powell, who was accompanied by the Assistant Secretary in the Federal Ministry of Energy, Mr. Paul Lloyd, attended the sustainable energy conference in Barbados, organized by the United Nations and the Government of Barbados last week.

According to the declaration ““ adopted ahead of next month’s UN Conference on Sustainable Development 20 years after the landmark Rio Earth Summit ““ 20 Small Island developing States (SIDS) gave voluntary commitments to providing universal access to energy, switching to renewable energy and reducing dependence on fossil fuels.

The meeting also came 18 years after an historic UN summit in Bridgetown first prompted international attention that the world’s environmental challenges, from water scarcity to rising sea levels, were felt first, and hardest, in small island and low-lying coastal developing states, from the Caribbean Sea to the Indian and Pacific Oceans.

While stressing there are “commercially feasible options” in many SIDS for providing energy such as wind, solar, geothermal, and oceans energy, the global collection of island and low-lying coastal states called for greater access to clean energy technology.

“However, these technologies must be made accessible, affordable and adaptable to the needs and particular circumstances of SIDS communities,” the Barbados Declaration said.

“In this regard, we strongly urge the international community, particularly developed countries, to ensure the provision of financial resources, technology transfer and capacity building to SIDS,” it added.

The declaration follows the Sustainable Energy for All initiative, launched by UN Secretary General Ban Ki-moon last September. The initiative seeks to ensure universal access to modern energy services, double the rate of improvement in energy efficiency and double the share of renewable energy in the global energy mix, all by 2030.