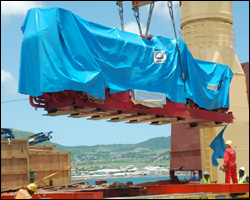 Two new generators for the Needsmust Power Plant were offloaded at the Deep Water Port in Basseterre on Saturday.

Civil works are continuing at the new site, east of the Needsmust Power Station to accommodate the four gensets, all of which will be in place and fully commissioned by the end of February 2011.

The largest engine, a 7.6 MW was damaged by fire in 2008. Additionally, the two Caterpillars purchased between 1989 and 1995 had to be removed from service due to their long history of failures and problems, poor fuel efficiency and extreme unreliability.

Between 2007 and 2011 the Ministry would have procured a total of seven (7) 4.0MW Holeby engines costing approximately US$58 million.

There are now two generating stations, one is partially automated and the other manual.  The old station contains three generators with an average age of thirty four (34) years which will soon have to be replaced also.

The newer station will house the four new Holebys.