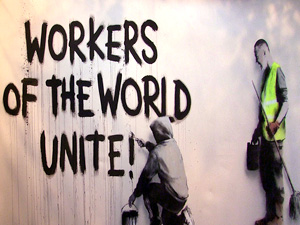 Labour Day Is May 2nd

Workers in St. Kitts and Nevis have been invited to join a family that will support their rights as employees and promote fair treatment in the workplace.

In anticipation of the upcoming Labour Day activities in the Federation, General Secretary of the St. Kitts and Nevis Trades and Labour Union (SKNTLU), Batumba Tak told SKNIS that his organization is currently on a recruitment drive to enlist and educate new members about the many opportunities available by being a card-carrying union member.

The initiative was described as crucial considering the declining status of unions internationally and the recent number of layoffs affecting locals.

Mr. Tak cited that the current uncertainty in the world of work influenced by the global economic crisis, as well as increases in the cost of living brought about by various factors served as a reminder of the continued importance of unions to workers who may need a powerful voice to protect their guaranteed rights.

“Many workers are suffering at the moment and they need someone to talk “¦ on their behalf,” he said, adding that there is strength in numbers. “When you join the union, you join a family “¦ because you spend more hours with your coworkers [on the job] than the family at home.

He emphasized that when employees join a union they are strengthening the numbers and thus empowering the organization as well as themselves.

Workers from across the Federation in the public and private sectors are eligible to join the SKNTLU, as it is an Industrial Union and essentially categorizes workers from various fields into one body. Membership dues were also highlighted as a positive which seeks to make the organization more attractive.

“The fees are not very high [and] have been so for a long, long time,” the General Secretary emphasized, noting that they are deliberately kept low to cater to the working class earning minimum wage. “To become a member of the SKNTLU, individuals pay $7.00 as an entrance fee and $2.00 weekly which amounts to $104 [per annum]. I think that is one the lowest fees in the Caribbean.”

The Union is a non-political organization and interested individuals are encouraged to visit Masses House on Church Street or telephone 465-2229 to learn more.

Labour Day in St. Kitts and Nevis is traditionally celebrated in the first Monday of May which falls on the 2nd of the month this year.