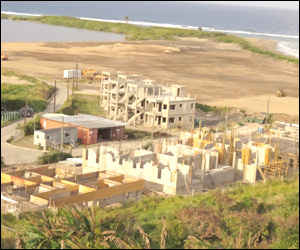 According to Alexander Britell, St. Kitts may be a relatively small island, but it seems hard to go anywhere here without seeing a new hotel or condominium project popping up.

“That’s because the Caribbean’s smallest sovereign country is undergoing a hotel development boom,” said Britell in a feature penned in the Caribbean Journal.

“Indeed, the twin-island federation of St. Kitts and Nevis is seeing a significant uptick in hotel and resort construction and development, including Kittitian Hill, which will soon open its first hotel and developments like the Pirate’s Nest, the Prime Hotel, the Imperial Bay and the planned Koi Resort & Residences. A Park Hyatt resort is also under development at the Christophe Harbour project on the country’s southeastern peninsula, with a targeted opening date of the end of 2015,” wrote Britell, who added:

“That’s in addition to a number of hotel renovation projects, including the Royal St. Kitts Hotel, which plans to complete its overhaul by 2015, the nearby Frigate Bay Beach Resort and the Ocean Terrace Inn, which launched a renovation project in 2014.”

Britell also wrote that St. Kitts’ cabinet approved another new resort project this week, the Heldens Estate Condo Resort & Residences, which will include more than 200 condos, apartments and villas in the St. Paul’s parish.

The multimillion-dollar project would include restaurants, bars, tennis courts and swimming pools and could create several hundred jobs, according to Information Minister Nigel Carty.

Much of the development has been fuelled by the country’s Citizenship by Investment programme, which offers the opportunity for citizenship in exchange for different levels of economic and real estate investment. The programme is the oldest of its kind in the world.