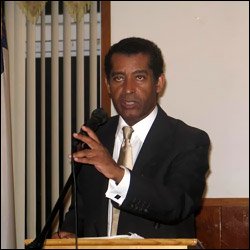 St. Kitts and Nevis’ Ambassador to the United Nations, His Excellency Ambassador Delano Bart is leading the twin-island Federation’s delegation to the 30th Meeting of the Conference of CARICOM Heads of Government in Guyana.

Some 14 Heads of Government are expected to be in attendance.

The official opening ceremony of the Meeting  late Thursday afternoon at the National Cultural Centre will see Incoming Chairman of the Community, His Excellency, President Bharrat Jagdeo as well as the outgoing Chairman the Hon. Dean Barrow, the Prime Minister of Belize, address the gathering. Additionally Antigua and Barbuda Prime Minister Hon. Baldwin Spencer, Prime Minister of Grenada, the Hon. Tillman Thomas and Secretary-General of CARCOM, His Excelelncy Edwin Carrington will also deliver addresses.

Prior to the opening ceremony, the Heads of Government will meet in caucus at the Guyana International Conference Centre (GICC).

According to the Caricom Secretariat, the business sessions of the Meeting will be held from July 3-4 at the GICC. These sessions will be devoted to discussions on four clusters of items; Economic Development, Human and Social Development, Strengthening the Caribbean Community and the Strengthening Alliances/Forging New Relations.

Discussions in relation to Economic Development will focus on the impact of the global economic and financial crises on the region and the response.  Developments related to the Tourism Sector, Developments related to Agriculture and Food Security and matters related to Services.  The Regional Strategy for Information and Communication Technology for Development (ICT4D), the Caricom Single Market and Economy (CSME); the free movement of persons and impediments to regional trade in goods will also be addressed.

The issues and recommendations emanating from the Twentieth Meeting of the Prime Ministerial sub-committee on External Trade Negotiations, which was held yesterday at the Caricom Secretariat, will also be discussed.

In the Human Development cluster, discussions will revolve around matters relating to Realizing the Nassau Declaration: The Health of the Region is the Wealth of the Region; the proposal for a special summit on Youth in addition to crime and security.

Climate change will also come up for discussion under the cluster titled “Strengthening the Community”. According to the Secretariat, “The Road to Copenhagen: Strategic and Policy Issues Regarding the Region’s Climate Change Agenda.” The Heads of Government will be examining the positions to be adopted by the Region’s negotiators in preparation for the Climate Change Conference in Copenhagen, Denmark scheduled for later this year.

The Heads will also exchange views with special guests including Secretary-General of the Commonwealth, Kamalesh Sharma and Secretary-General of the Organization of American States (OAS) Jose Miguel Insulza.  Executive Secretary of the United Nations Framework Convention on Climate Change (UNFCCC) Yvo De Boer and representatives of the International Financial Institutions will also be part of the discussions when cluster Alliances/Forging New Relations commence.

Further deliberations will also centre on the recently concluded Fifth Summit of the Americas and Caricom-US relations.

Guyana’s Government Information Agency (GINA) on Wednesday reported that leaders including Prime Ministers the Hon. David Thompson of Barbados, Hon. Bruce Golding of Jamaica and Hon. Patrick Manning of Trinidad and Tobago, joined His Excellency President Jagdeo at the CARICOM Secretariat for the 20th meeting of the Prime Ministerial sub-committee on external trade negotiations.

GINA said that on the agenda was the discussion of matters relating to the incorporation of the Caribbean Regional Negotiating Machinery (CRNM) into the CARICOM Secretariat as a specialized department.

President Jagdeo had chided the CRNM for being in a “crisis-of-governance situation” for over three years. His remarks came in the backdrop of the negotiations with Europe for an Economic Partnership Agreement (EPA).

Jagdeo, GINA noted, was adamant that it had failed to negotiate a proper deal with Europe. He was also concerned over what he said was its lack of representation of Guyana during trade talks.

Another topic for discussion at the meeting was preparations for the commencement of CARICOM-Canada negotiations for a trade and development agreement, and the appointment of the CARICOM College of Negotiators to conduct the assignment.