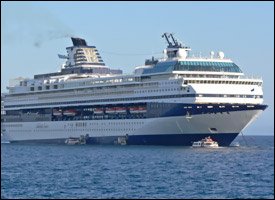 St. Kitts’ Port Zante is on the itinerary of the 1,886-passenger Celebrity Mercury during the upcoming 2009/2010 cruise ship season.

The Celebrity Mercury will sail a 17-night Panama Canal cruise from San Diego to Baltimore on Oct, 23, 2009. It will then remain in Baltimore through February 2010, offering 12-night Eastern Caribbean cruises that call in St. Thomas; St. Kitts; Antigua; St. Maarten and Tortola.

The Mercury will head to Charleston from February to April 2010, offering 10- and 11-night Eastern and Western Caribbean voyages.