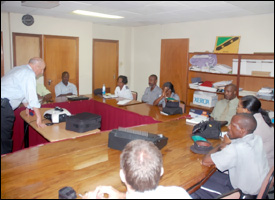 In its determination to improve its relationship with the various communities, the Ministry of National Security and Immigration has been getting the assistance of the Government of the United States.

The U.S. Embassy in Barbados recently provided the services of Criminologist and Executive Director of the Police Executive Research Forum (PERF) in Washington, D.C., Mr. Chuck Wexler, to engage in discussions with local security personnel and members of the St. Kitts and Nevis Hotel and Tourism Association (HTA).

Similar workshops were held in Grenada, Barbados and St. Lucia in which members of civil society and policy makers were engaged in which interactive sessions of specific scenarios were discussed. During these sessions, Wexler presented cases for behavioral changes and approach to authority for both groups in order to attain full cooperation within the society.

“Our aim is to continue one of the goals in building capacity in our police force and to improve and introduce new techniques.  We have received the assistance of the U.S. Embassy in Barbados to support us in the area of community policing as we seek to confront this challenge to our national development,” said Special Advisor in the Ministry of National Security and Immigration, Dr. Norgen Wilson.

Dr. Wilson said that the Ministry intends to continue its relationship with Mr. Wexler. He reported Mr. Wexler as indicating that all the officers who participated in the lecture responded with excitement and willingness to continue to learn more.

“Already some communities such as Mc Knight, Trafalgar Village and New Town have had an increase in police foot patrols as well as joint Police/SKNDF foot patrols. These we hope to extend to all communities in the near future as we continue our fight against crime,” said Dr. Wilson.

PERF is a membership organization of law enforcement chiefs from the larger police agencies in the country. It was founded more than a quarter century ago by a number of chiefs who saw a need for an organization dedicated to progressive thinking about difficult issues in policing.

During his tenure at PERF, Wexler has been directly involved in numerous technical assistance, research and consulting projects to improve the delivery of police services. Examples of major projects include his work coordinating the development and implementation of a comprehensive anti-crime strategy in Minneapolis that is now a model for public-private cooperation. He has been involved in policing projects in Chicago, Kansas City, Los Angeles, Northern Ireland, Kingston, Jamaica, London and the Middle East.