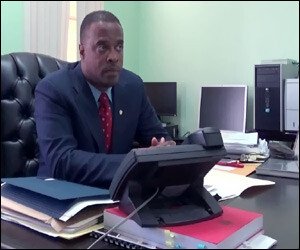 Approximately 120 delegates are expected to participate in the 33rd Model OAS General Assembly (MOAS) for Universities of the Hemisphere scheduled for March 24 to 26, in St. Kitts and Nevis.

According to its official website, the Model session “is a simulation exercise where, through role-playing, the students represent the diplomats and political officials of the Member States of the OAS and follow parliamentary proceedings to debate and approve resolutions dealing with current issues.” It is designed “to promote democratic values among the youth of the Hemisphere by familiarizing students, faculty and academic institutions of the Americas with the work of the OAS and its Member States, as well as with the Organization’s role as the premier political forum in the Hemisphere.”

Minister of Foreign Affairs, the Honourable Mark Brantley said the hosting of the MOAS in St. Kitts and Nevis is a historic moment for the twin-island Federation.

“We feel very proud,” he stated. “This is the first time, I am advised, [that] it is being hosted in the English-speaking Caribbean and so it means that St. Kitts and Nevis is making history in stepping up to the plate as a small country to host this very significant gathering of young people [they being] University students from all over the region.”

Minister Brantley thanked St. Kitts and Nevis’ Ambassador to the OAS, Her Excellency Jacinth Henry-Martin, who he credited as being the “driving force” behind the success of bringing the MOAS to the country. He added that it fits nicely with the objectives of his one-month old government.

“Our own approach as a new government towards foreign policy is to enlarge the footprint of St. Kitts and Nevis to ensure that our position in the region, in the world, is better developed and we feel that this is the type of exposure that is important for us as a small country,” he articulated. “… This is a very bold step that we are taking.”

The ability to showcase the rich cultural, culinary and tourism offerings of the country were listed as benefits of hosting the conference. However, Minister Brantley said he was most excited by the potential for exchanges between the local students and those from overseas.”

“Our young people have an opportunity to interact with, rub shoulders with, learn from and teach students from other parts of the OAS and we feel that that augurs well in terms of future relations and in terms of people to people relations and bringing our people closer together,” the foreign affairs minister stressed.