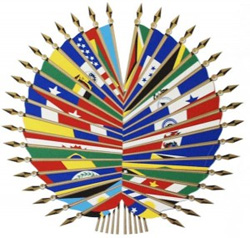 The Flags of the CARICOM Countries

St. Kitts and Nevis’ Prime Minister Hon. Dr. Denzil L. Douglas is to host the Thirty-Second Regular Meeting of Caribbean Heads of Government in Basseterre in July this year.

A special two day Retreat in Guyana confined to discussing the way forward for CARICOM, prior to the Regular Meeting in St. Kitts and Nevis will be held hosted in Guyana by that country’s President, His Excelelncy Bharrat Jagdeo.

Heads of Government at the just concluded Inter-Sessional in Grenada in their communiquÃ© they “looked forward to their Regular Meeting to be held in St. Kitts and Nevis next July and committed themselves to that spirit of regionalism that inspired the Community’s highest moments of achievement.”

Heads of Government reaffirmed their commitment to the regional endeavour and agreed that the objective of the Regional Agenda should be focused on improving the Lives of the People of the Caribbean Community.

In noting that there appeared to be a loss in the momentum with regard to the regional integration agenda, Heads of Government agreed there was a need to reassess approaches with a view to determining modalities that would re-energise the Regional Integration endeavour, in accordance with their vision.

Heads of Government recognised that their discussions were taking place against the backdrop of the rapidly changing international environment, including the on-going global financial and economic crisis which has had a negative impact on the economies of the Region.

They fully recognized that the Region itself was facing many serious challenges to its survival. They were however convinced that as a community of states committed to the concept of a Region moving together, these challenges could be overcome.

It was against this background that, despite their concern at the slow pace of the regional integration movement, Heads of Government urged that the Community should not allow itself to be discouraged by the often expressed views that CARICOM was in crisis. They urged instead, that the Region be viewed as being at the crossroads of opportunity.

“Heads of Government believed that CARICOM’s leadership, at all levels, should acknowledge the protracted challenges and the urgency of arresting the associated perception of decline. The most urgent need was not for broad new decision-making; it was for implementing decisions already made and embodied in the Revised Treaty of Chaguaramas and living by the spirit of unity and collective action that inspired the Grand Anse Declaration which preceded it,” said the communiquÃ© .

“Heads of Government are of the view that it is time for faith in the onward march of Caribbean civilization and for progressive, enlightened and courageous action by a united Region strengthened by that self-belief.