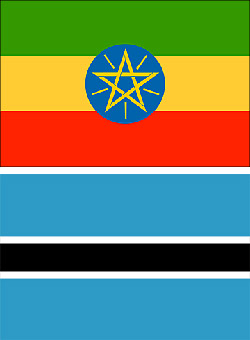 St. Kitts and Nevis is to establish diplomatic relations with two African countries.

The Federal Cabinet announced Tuesday that in accordance with the Foreign Policy of the Government of St. Kitts and Nevis will establish diplomatic relations with Ethiopia and Botswana, two countries of strategic importance on the African continent.

“Ethiopia is credited with being the origin of human civilization. It is the oldest independent African country and is numbered among the oldest in the world. Ethiopia also holds a position of importance to the Rastafarian community,” said Minister of State for Information, Sen. the Hon. Nigel Carty.

He said that the St. Kitts-Nevis Labour Government of Prime Minister Hon. Dr. Denzil L. Douglas believes that official diplomatic relations between St. Kitts and Nevis and Ethiopia “is an important step in promoting cultural awareness and unity among African people on the continent and in the diaspora.”

“Botswana is hailed as one of Africa’s most stable democracies. It is a middle income country and has the longest continuous multi-party democracy on the continent and is the world’s largest producer of diamonds,” said Minister Carty.

The establishment of diplomatic relations with these two countries, Ethiopia and Botswana, was recommended by the Foreign Service Consultative Committee, a committee consisting of about six nationals whom the government believes can make a strong contribution to discussions about our foreign policy strategy.