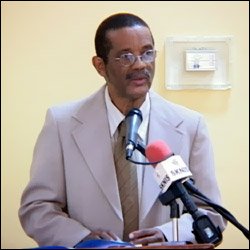 Permanent Secretary of Education Mr. Osmond Petty has stated that he is pleased with the content of a recent anger management workshop and satisfied that after participation educators would be better able to address classroom issues that could lead to acts of violence.

Mr. Petty prepared the anger management Project Concept and Proposal in June 2009 and submitted it to the Ministry of Sustainable Development for consideration by the OAS.

OAS Representative to the Federation of St. Christopher and Nevis Mr. Starrett Greene has commended the Ministry of Education for its aggressive pursuit of technical assistance from the Organization made evident by its securing the largest share of such assistance among ministries. Mr. Green was addressing participants at the first in the series of anger management and conflict resolution workshops organized by the Ministry of Education and funded by the OAS to the tune of U.S.$20,000.

Mr. Greene said his organization would continue to support meaningful and sustainable programmes for the development of the Federation.

The ministry sought the assistance of the OAS in this venture as a means of helping educators better manage the school environment by developing skills to alleviate tense situations that could lead to outbursts of violence among students.

Permanent Secretary in the Ministry of Education Mr. Osmond Petty said not only will educators leave the workshop with upgraded skills, but each participant will also have a valuable resource in the form of a booklet for their use in the future. He further explained that follow up is a key component of his ministry’s strategy to curb violence in schools.

Dr Tricia Esdaille is a Research Psychologist employed by the Ministry of Education who will manage the second phase of the anger management and conflict resolution strategy which will be carried out within the schools themselves.

In addressing participants, Minister of Education Hon. Nigel Carty highlighted the relevance of the seminar in his Government’s overall societal empowerment strategy which he said hinges on family unity. He reflected on the theme of the recent Independence celebrations stating that Government needed to give a strong signal of its committment to family development as part of the strategic fight against criminal activity.

Commenting on a recent paper by Professor Dr Errol Miller in which he singled out the Federation as exemplary in its education system, Minister Carty said his Ministry would seek to improve even further.

Mr. Nielsen Waithe, course facilitator and consultant is a therapist who has been working with schools in Barbados since 1998. He has worked in other Caribbean Islands including Antigua and Grenada and has also been invited by Jamaica and Trinidad. He is the author of the anger management resource book being distributed at the workshop.

Mr. Waithe said while this phase of the training for teachers is critical, he anticipates the second component in which he will interact with students and parents as well.

Thirty-two teachers will take part in each workshop happening over the next few weeks and through the month of October. Senior Assistant Secretary Jacqueline Fleming was named project coordinator in consultation with Mr. Petty and consultant Niehlsen Waithe.