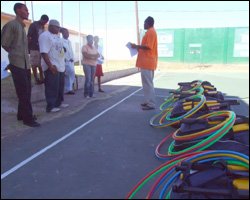 The positives of playing sports at an early age to promote physical activity, develop discipline and team working skills as well as to reduce negative influences were shared with teachers in St. Kitts as part of the local Game On! Youth Sports! initiative.

Representatives from the Saddlers, Convent, Dr. William Connor, Bronte Welsh and Beach Allen primary schools as well as the Department of Youth were exposed to the message at a recent three-day workshop. They were joined by officers from the Department of Sports for the training which introduced teaching methods for fundamental techniques of running, catching, walking and other motor skills for young children.

Director of Sports, Dave Connor, told SKNIS that the workshop was very successful. He noted that the participants, which also included six members from the Youth Empowerment through Skills (YES) project, were enthused by the lessons designed to make youth sports fun while enhancing the prospects of producing future athletes.

While presenting the equipment, Mr. Connor stressed that more active children will lead to a healthier lifestyle as they continue to grow. This would then result in a drop in the number of cases of common non communicable diseases such as hypertension and obesity.

Julian Philbert of the Dr. William Connor primary school thanked the Department of Sports for organizing the workshop which he described as practical and interactive. He stated that he and his colleagues understood the value of physical education and were committed to using the donated gear to enhance the experience for the children.

The Game On! Youth Sports! programme is modeled after that of the National Alliance for Youth Sports (NAYS). St. Kitts and Nevis has a close association with the Florida-based organization which has donated sporting gear and equipment in support of the local venture in the past.