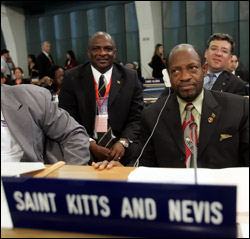 The development of bioenergy and other alternative forms are of critical importance to St. Kitts and Nevis.

So says St. Kitts and Nevis Prime Minister and Minister of Sustainable Development, Hon. Dr. Denzil L. Douglas, who told a high level conference on World Food Security at the FAO Headquarters in Italy on Tuesday that the twin-island Federation has developed an energy strategy that is intended to help promote and contribute to the sustainable development of the country.

“Consequently we are seeking to develop indigenous sources and fuel substitution in the generation of electricity and transportation fuels. The use of biomass for energy generation is one area that is under active consideration. However our aim is to ensure that such biomass use is sustainable and does not adversely effect domestic food production,” Prime Minister Douglas told the several Heads of State, Heads of Government, Ministers and experts.

He said his governing St. Kitts – Nevis Labour Party Administration has given approval in principle for a biomass (cane grass) project as well as the establishment of a wind farm.

Much attention he said is currently being paid on the development of a geothermal project for electricity generation while the use of solar energy is also under active consideration.

The St. Kitts and Nevis leader said there is no doubt that the escalating price of fossil fuel has impacted negatively on food security, while there is continued debate about the effects of bioenergy.

He noted that bioenergy has been defined as energy produced from biomass such as energy crops, forestry residues and organic wastes and currently much attention is being paid to the production of liquid biofuels, mainly ethanol and biodiesel.

The biofuels are mainly produced from food crops and are used for transport. Ethanol is mainly produced from sugarcane and maize while the production of biodiesel is from rapeseed but also palm oil and soyabean oil. The growing biofuel market is driving up commodity and food prices and represents a new source of demand for agricultural commodities.

“This growth can provide new economic opportunities for the many millions of people who depend on agriculture for their livelihoods. On the other hand, the soaring food prices are bad news for poor consumers and are dramatically worsening their living conditions. We now have a situation in many parts of the world where food and energy crops are competing for land, water and other resources. As policy makers, we have the difficult task of determining how best to respond to the new opportunities while ensuring that our people can grow and buy adequate food,” noted Prime Minister Douglas.

He stressed that there is clearly a strong need to better understand the nexus between food security, climate change and bioenergy.

“It is important to note that the degree to which the rapid rise in demand for biofuel feedstocks has contributed to the current rise in food prices varies across countries and that the impact on livelihood is also variable. However, poor countries that are both food and energy importers are facing tremendous balance of payment pressures that can result in an erosion of economic and social gains,” said Prime Minister Douglas.

He said that the four dimensions of food security which are availability, access, stability and utilization can also be expected to be affected in varying ways.

“The diversion of land, water and other productive resources from food to biofuel production can threaten the availability of food on both the national and international level. Higher food prices can further erode the ability of poor persons to access food due to their low income levels. However farmers who are net producers can benefit from higher prices and investments in bioenergy growth can revitalize agriculture and provide employment opportunities,” said Dr. Douglas.

He added that food security can therefore be expected to improve for some persons while others are experiencing deterioration.

“A challenge for us is therefore to develop and agree on steps that would have to be taken towards developing sustainable bioenergy policies and programmes taking into account food security and rural development,” said Prime Minister Douglas.