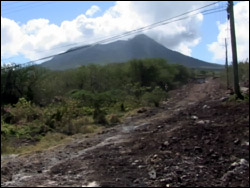 Pathway For A New Nevis Road

June 03, 2008, marked the commencement of a three and a half month phase of road construction at Pinneys.

The excavation work is the first phase towards providing access for 200 lots in the Nugents Village, Nugents Heights and the Pinney’s Commercial area.

Minister Hector spoke of the benefits to buyers and prospective purchasers.

“I think the development of this area is key to the entire country.  We would like to know that those who have bought commercial plots can see now how great a development can take place within that area, so too those who have looked at residential lots are in a position to start their construction,” he said.

He expressed gratitude to Surrey Paving and the NHLDC for their work on the project.

“I want to say a particular thank you to Surrey Paving for again assisting us in terms of doing this development.  I think it is clear now, on this island, the great work that Surrey Paving is doing and as a partnership, we are definitely moving places.  I want to thank also the manager of the Land and Housing Corporation who has been doing an excellent job, he and his staff,” the Minister said.

Mr. Hector asked for the understanding of the general public as the NIA attempted to improve infrastructure on Nevis.

“With infrastructure, there would be some interruption.  Water lines will be put in, electricity would be put in and I’m asking the general public to bear with us and to work with us as we seek to develop Nevis in a greater way,” he said.

Mr. Eustace Nisbett expressed similar sentiments with regard to the benefits the construction of the new roads would bring.

“We are giving back to the purchasers and catering for the individuals who purchase land from the government.  We are happy to help,” Mr. Nisbett said.

Meantime, Mr. Lewis used the opportunity to assure all that his company would provide excellent service to the people of Nevis.  He also indicated that side-walks and curb drainage construction would be included in the road building process.

“Surrey Paving will always provide a quality job for the people of Nevis and we will ensure that proper access can be attained to all lots on this development; the commercial and the residential lots,” he said.

Mr. Lewis highlighted the steps he and his team would take in order to have the project completed.

“We are going to concentrate on this project on a phase basis.  We are starting with the two major roads, that’s the two major access roads; one that starts by the petrol station closer to TDC and the other by upper Craddock Road,” he said.