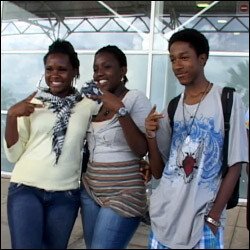 “Beautiful people,” culture maintained” “recycling,” and “no wasting” were some of the words used by the returning members of UNESCO Small Islands Voice (SIV) students when they described their experience in the Cook Islands, in the Pacific.

Markysa O’Loughlin, Makeila Armstrong and Jharez Taylor all affirmed that the Federation of St. Kitts and Nevis could borrow a page or two from the Cook Islands when it came to sustainable development.  The UNESCO SIV initiative was created and launched with the objective of bringing to the fore such issues pertaining to environment and development.

These “Conch Shells” of the Back Chat group, returned last Monday, enthused with what they had seen, heard, tasted, touched and even smelled of island culture preservation.  While there, they gave Cook Islanders a taste of the Kittitian-Nevisian culture through presentations which included a history of the Caribbean including the Pre and Post-Emancipation era along with the present era.  The students sang excerpts of King Konris’ “One Song,” recited original poetry, played steel pan and danced.

The exchange of culture went both ways and one of the features that impressed the three Federal Ambassadors was a trip to Aitutaki Island which they described as being 75 percent water protected by coral reefs.

They spoke of a tour in which they sailed the lagoon and visited six small islands which they said was an extremely enjoyable experience.  Additionally, the attire of the residents impressed Markysa O’Loughlin who spoke about the school uniforms.  She said that students wear light fitting, sundress without sleeves and flip flops.  Teachers along the same vein wear tank tops and batik skirts.  It was emphasized that they do not indulge in American-influenced clothing but use indigenous wear.

Makeila Armstrong similarly observed that in Rarotonga and in Aitutaki, there is one television station that rotates its viewing.  She said that for a certain period of time there is gospel, children’s programming, educational programming or sports.  Ms. Armstrong expressed that initially she found this concept to be restrictive in nature but then she said she came to the realization that it was being done in order to preserve the culture of the islands.  She said that in the Federation residents often imitate what is seen abroad, but she noted that if such is not brought into the federation via cable television then there would not be much to imitate.

The students also reveled in the fact that a visit to one of the landfills was comparable to a visit to a factory.  Everything was orderly and there were piles of plastic bottles and even the aluminum cans were crushed and ready to be shipped to a roofing-tile manufacturer.  They suggested that St. Kitts and Nevis should make the investment ““ in terms of recycling ““ noting that while the establishment of such a facility was expensive, in the long term it would be profitable, monetarily and environmentally.

Jharez Taylor remarked that even certain establishments were models of recycling.  He said that one of the top resorts in the Cook Islands has a waste collection facility that St. Kitts and Nevis hotels should be encouraged to emulate.  Mr. Taylor said that all of the hotel’s waste including that from the kitchen and toilets is gathered and processed and used as fertilizer in the gardens, which eliminates piles of garbage.  He said that some of the used oil from the kitchen is processed into biodiesel which is used to run one of the resorts vans.  The male ambassador noted that the resort revealed that there were plans to expand the biodiesel operations, so that the fuel could be used by all of the vacation spot’s vehicles.  Mr. Taylor emphasized that in his opinion it was better to recycle and use waste material rather than pumping it underground where it carried the risk of contaminating the water table.

O’Loughlin, Armstrong and Taylor kept illustrated diaries of the visit to share with colleagues and eventually upload on the SIV website.  They are also expected to develop a programme to share their experiences with their peers in the Federation.  They were chosen for this important task of cultural exchange due to their involvement in SIV activities and their interest in exploring different island cultures.