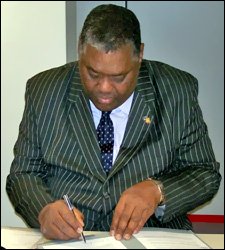 Two weeks after Prime Minister Hon Dr. Denzil L. Douglas announced that his Labour Party Administration had taken measures to improve the Federation’s standing with the Organisation for Economic Cooperation and Development (OECD), tax information exchange agreements have been signed with four countries.

The signing ceremony took place in The Hague, the Dutch capital, where St. Kitts and Nevis High Commissioner to the United Kingdom, His Excellency Dr. James Williams, signed the treaties on behalf of the Federation with representatives from the Netherlands Antilles and Aruba.

“This brings to four the number of TIEAs that have been signed by the Federation,” said Chief Executive Officer of the St. Kitts Investment Promotion Agency (SKIPA), Ms. Shawna Lake.

She disclosed that two Tax Information Exchange Agreements with the Kingdom of Denmark and the Kingdom of the Netherlands were signed during the margins of the OECD Global Forum on Taxation held in Mexico City earlier this month.

Ms. Lake said St. Kitts and Nevis has already negotiated the text for additional TIEAs, but is awaiting indication from the relevant countries about the dates for the actual signing of these agreements.

During his recent press conference, Prime Minister Hon. Dr. Denzil L. Douglas told reporters his government would soon sign TIEAs with several countries including Finland, Iceland, Norway and Sweden. Additional agreements are also being sought with New Zealand, Australia, and Canada as the government seeks to move from the OECD’s “˜grey list’ to the “˜white list.’

In April, the Paris-based OECD placed St. Kitts and Nevis and several other Caribbean countries on its “˜grey list’ of jurisdictions that “have committed to the internationally agreed tax standard, but have not yet substantially implemented.”

To move up to the “˜white list’ of jurisdictions that “have substantially implemented the international tax standard,” countries are required to sign TIEAs with at least 12 OECD member countries.