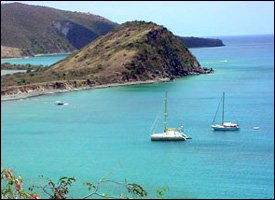 Amidst the glare of local and foreign business leaders and investors, the Political Leader of the People’s Action Movement (PAM), Mr. Lindsay Grant has been forced to change his Party’s tune and finally admit that the multi-billion dollar project on the South East Peninsula attracted to St. Kitts by the Denzil Douglas Labour Party Government is good for the economic development of the twin-island Federation.

Mr. Grant has also admitted that the developers of Christophe Harbour did not buy any land from the government of Prime Minister Hon. Dr. Denzil L. Douglas.

In fact, Mr. Grant has finally agreed with the St. Kitts and Nevis leader that several ongoing projects including the Christophe Harbour Development, the Ocean’s Edge Resort and the Silver Reef Resort, all now under construction, will not only enhance the quality of life of nationals, but also provide jobs for locals, but also boost the national and other sectors of the economy.

“Obviously Christophe Harbour did not buy any sugar lands (from Government). I have not said anything about Christophe Harbour. We are not adverse to the development over here. In fact we welcome it and what it brings and what it does. It is going to be tremendous for this country. Tremendous in terms of the economics, in terms of jobs, in terms of the revenue base. I will be folly to speak (negatively) about that,” Grant said in response to questions from prominent Kittitian Queen’s Counsel, Mr. Charles Wilkin at last Wednesday’s Independence luncheon of the St. Kitts and Nevis Chamber of Industry and Commerce.

Mr. Wilkin had also referred to the PAM’s mouthpiece “The Democrat” referring to investment projects as a returning the people of St. Kitts and Nevis to slavery.

The PAM platform speakers and the Democrat, the mouthpiece of the PAM, have on several occasions referred negatively to the Christopher Harbour Project and accused the present government of selling the lands to the developers.