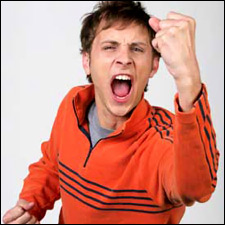 The importance of understanding anger was emphasized at the second in a series of Anger Management Workshops organized by the Ministry of Education recently.

Permanent Secretary in the Ministry of Education Osmond Petty, reflecting on the fact that anger is a natural human emotion, explained that when seeking to deal with the issue of violence and anger in youths, it is important to discover the underlying causes and the primary emotions that lead to anger as well as to accept their right to be angry.

“What matters is how persons are taught to deal with the anger they feel,” Mr. Petty said, “For some young people, their anger gets out of control and they find themselves in difficulties, especially at school. As a result, anger management groups have become more and more common in education. That is why we have been having anger management training for teachers, guidance counselors and other key personnel,” He added.

“We don’t just get angry! We first feel afraid. We feel attacked, disrespected, offended, forced, trapped, pressured! When these feelings are strong enough, we think of the emotion as anger. Successful work with young people in anger management therefore will involve helping them identify and deal with their primary emotion as well as with their anger,” said Petty.

Course Facilitator, Jacintha Browne Taitt who supported the view expressed by Mr. Petty, told participants that they would be required to first get in touch with their personal emotions before seeking to assist young people in managing theirs.

Ms. Taitt also referred to crisis anger which is the stage at which the young person becomes so angry that they get out of control. She revealed that at this point, “They say the pupil has popped. It is important that adults have the skills to bring them back under control and to help explore why they behave angrily.”

OAS representative Mr. Starrett Greene was complimentary regarding the aggressive approach taken to securing funding for programmes and interventions that bring about positive sand meaningful change and development in the society.