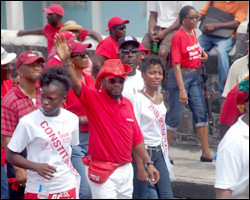 Marchers In The 2011 Labour Day Parade
Photo By Erasmus Williams

Led by the Pom Pom girls, hundreds more lined the route to watch the spectacle as the march, which grew in numbers, as it wended its way from the Patsy Allers Playing Field through Basseterre via Cunningham, Central, Fort, Bank, George and Cayon Streets before returning to be addressed by Prime Minister Hon. Dr. Denzil L. Douglas prior to an afternoon of picnicking and games.

Wreaths were also laid on the graves of the late Sir Lee Llewellyn Moore, the late Clarence Fitzroy Bryant, the late E. St. John Payne and the late Fidel O’Flaherty after brief remarks.