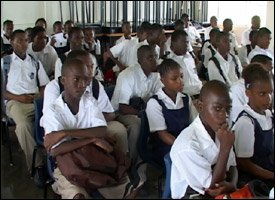 The Ministry of Tourism, Sports and Culture has begun its review of existing sports development programmes, and all parties agree that that the process is off to a good start.

On this week’s edition of SKNIS Perspectives, Director of Sports, Dave Connor explained that the Ministry is currently redefining and redesigning its approach in sports and the way it interacts with stakeholders. He revealed that a decision was taken to start with track field in order to continue the momentum from the respectable showing at the Beijing Olympics and the bronze medaling at the recently held Commonwealth Youth Games.

As such, sports administrators and development consultants Donald Quarrie and Howard Aris of Jamaica were brought in to share their experience with sporting administrators and coaches from the Department of Sports, Local Olympic Committee, athletic associations and other related agencies. Interactive motivational sessions were also held with athletes and various officials.

The duo, was specially invited by the Prime Minister, who is responsible for sports, after he met the pair in March during the 2008 CARIFTA Games. Prime Minister Hon. Dr. Denzil Douglas spent last Friday, with the visiting team touring the high schools on St. Kitts as they stressed the benefits of sports including teamwork, discipline, motivation, self esteem and self respect.

Former Olympic and Commonwealth champion Donald Quarrie has been to several places around the world on similar consulting missions the latest been to China prior to the Olympics.

“These are the things that I enjoy doing. Reaching out to youngsters and sharing experiences with them,” he said. “You have potential for [producing] outstanding athletes based on what I saw at the CARIFTA Games, so your future is very bright and we are hoping that what we [shared] will be of some help to you.”

A planned visit to high schools in Nevis was cancelled due to inclement weather. However, officials crossed the waters on Saturday to participate in a roundtable discussion.

Mr. Aris is President of the Jamaican Amateur Athletic Association and advises the current Government on sports related matters. He served two prior administrations in this regard as well. Aris described the exchanges between the two countries as “enlightening.”

He noted that he was intrigued with the system used to quantify the number of participating athletes in track and field events and was going to adopt the model upon his return to Jamaica.

“We look forward to a continued and continuous relationship with St. Kitts and Nevis,” Aris stated, adding that the structure of local programmes are very good.

Athletes, officials, coaches and administrators each agreed that the interaction was productive and was confident that the exchange will help to strengthen local initiatives.