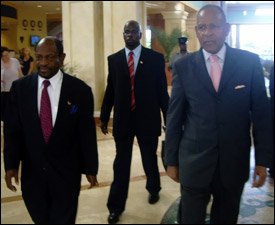 Thursday’s meeting in St. Kitts and Nevis between the Prime Minister of Trinidad and Tobago, Hon. Patrick Manning and Heads of Government from the Organisation of Eastern Caribbean States will discuss further the idea of the oil-rich Caribbean republic becoming a member of the proposed sub-regional economic union and a subsequent political union with St. Lucia, Grenada and St. Vincent and the Grenadines.

“We felt that the second initiative (Political Union) is a very serious initiative. We know that it is an initiative that is being proposed by those three OECS countries and Trinidad and Tobago. We believe that we wanted to discuss that in a much more frank and open way in the presence of the Prime Minister Manning and so we invited him to come to St. Kitts and Nevis when we meet on Thursday to pursue this particular discussion,” said Prime Minister Douglas.

The OECS proposes to put in place the Economic Union by 2009. Trinidad and Tobago wants to join the economic union by 2011. The Political Union comprising Trinidad and Tobago, Grenada, and St. Vincent and the Grenadines should be implemented by 2013.

“There is a lot of work to be done because we would have to do a number of studies. We have to look at how Trinidad and Tobago would adjust to the common currency that we use in the OECS countries; whether we will begin to use the Trinidad currency or whether Trinidad will begin to use our currency or whether there will be some kind of convergence of currencies as we look at the way forward,” said Prime Minister Douglas.

Prime Minister Douglas said a number of possible scenarios could be identified as the process moves forward in consultation with the peoples of the region.

“It is still in the discussion stage. Although we say it is desirable, we do not know what the Heads of Government will say collectively to the request of Trinidad and Tobago to become a member of the OECS,” said Dr. Douglas at the heads of government level.

Grenada’s Prime Minister Hon. Tillman Thomas will not attend but will be represented by his Foreign Minister, Hon. Peter David. Dominica’s Prime Minister Hon. Roosevelt Skerritt will not make it as he continues to assess the damage caused by the recent passage of Hurricane Omar. British Virgin Islands and Anguilla Chief Ministers Hon. Ralph O’Neal and Hon. Osbourne Fleming will also be absent.